Last week, for the first time, Facebook confirmed this trend when Facebook Chief Financial Officer David Ebersman stated “a decrease in (teenage) daily users, especially younger teens” during a quarterly earnings call.  With the rise of parents on facebook and new social media apps like twitter, instagram and vine teens are finding new ways to stay connected. CEO of Project Tomorrow, Julie Evans began reporting this trend in early April 2013 based on findings found in the Speak Up 2012 national data results. During the June 4, 2013, Speak Up Congressional briefing on the National Findings for K-12 students, Julie stated :
“This is an interesting trend that we have been actually watching over the past couple of years though we have not reported on it before. And it’s this idea around students’ decrease in using facebook as a tool. We do still see a majority of high school students that say that they are regularly maintaining a facebook page but to be honest with you it has been on a pretty steady decline since 2007– About a 21% decline from the highpoint that we noted in 2007.”
Although Facebook usage has shown a decline, Speak Up data has shown an increase in teen students using Twitter with 3 out of 10 students in Grade 6-12 using the social media site. To further this research, this year we’ve added a new option asking participants about usage of social media apps such as instagram, snap chat and vine.
What are your thoughts on the decline of teen usership of facebook? Read more about it in the CNN article “On Facebook, a growing teenage wasteland”, here. 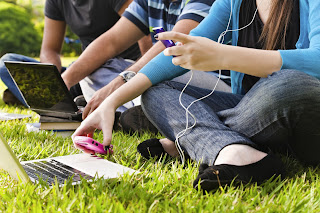 Want to learn more about your students, K-12 parents and educators’ social media usage? Participate in Speak Up and get your own local participant data on this growing trend! This year, our Speak Up Surveys will once again ask questions related to student, parent and educator social media use. Question topics include:
Social media tools or applications used inside and outside of school/work.
The type of sites used socially and those for schoolwork/professional tasks.
and new this year, we are asking about social media app usage- such as instagram, snapchat and vine.
Speak Up Surveys are open for input through Dec. 20th, 2013. All schools (public, private, charter) are eligable to participate in Speak Up and all participating schools and districts will receive free online access to their participant data in February 2014. Results regarding student, parent, and educator social media usage will also be a part of that data.
To participate in Speak Up go to www.speakup4schools.org/speakup2013, surveys are available to students, educators, parents and community members. To learn more about how to get your school(s) involved please contact the Speak Up Team at speakup@tomorrow.org or visit www.tomorrow.org/speakup.
Our helpful and handy promotional materials can assist you in spreading the word about Speak Up to your students, parents, teachers, administrators, and more! View our full list here.
Join the Speak Up conversation on Twitter! #SpeakUp2013 & @speakuped
Have a wonderful day.
– The Project Tomorrow team